Big Questions about our universe

Stephen William Hawking, (born 8 January 1942) is a British theoretical physicist. He is known for his contributions to the fields of cosmology and quantum gravity, especially in the context of black holes. He has also achieved success with works of popular science in which he discusses his own theories and cosmology in general; these include the runaway best seller A Brief History of Time, which stayed on the British Sunday Times bestsellers list for a record-breaking 237 weeks.

Hawking's key scientific works to date have included providing, with Roger Penrose, theorems regarding singularities in the framework of general relativity, and the theoretical prediction that black holes should emit radiation, which is today known as Hawking radiation (or sometimes as bekenstein-Hawking radiation). He is a world-renowned theoretical physicist whose scientific career spans over 40 years. His books and public appearances have made him an academic celebrity. He is an Honorary Fellow of the Royal Society of Arts, and a lifetime member of the Pontifical Academy of Science. On August 12, 2009, he was awarded the Presidential Medal of Freedom, the highest civilian award in the United States.

Hawking is the Lucasian Professor of Mathematics at the University of Cambridge (but intends to retire from this post in 2009), a Fellow of Gonville and Caius College, Cambridge and the distinguished research chair at Waterloo's Perimeter Institute for Theoretical Physics.

Hawking has a neuro muscular dystrophy that is related to amyotrophic lateral sclerosis (ALS), a condition that has progressed over the years and has left him almost completely paralysed.

In the late 1960s, he and his Cambridge friend and colleague, Roger Penrose, applied a new, complex mathematical model they had created from Albert Einstein's general theory of relativity. This led, in 1970, to Hawking proving the first of many singularity theorems; such theorems provide a set of sufficient conditions for the existence of a singularity in space-time. This work showed that, far from being mathematical curiosities which appear only in special cases, singularities are a fairly generic feature of general relativity.

He supplied a mathematical proof, along with Brandon Carter, Werner Israel and D. Robinson, of John Wheeler's "No-Hair Theorem" – namely, that any black hole is fully described by the three properties of mass, angular momentum, and electric charge.

Hawking also suggested that, upon analysis of gamma ray emissions, after the Big Bang, primordial mini black holes were formed. With Bardeen and Carter, he proposed the four laws of black hole mechanics, drawing an analogy with thermodynamics. In 1974, he calculated that black holes should thermally create and emit subatomic particles, known today as Hawking radiation, until they exhaust their energy and evaporate.

In collaboration with Jim Hartle, Hawking developed a model in which the universe had no boundary in space-time, replacing the initial singularity of the classical Big Bang models with a region akin to the North pole: One cannot travel north of the North Pole, as there is no boundary there. While originally the no-boundary proposal predicted a closed universe, discussions with Neil Turok led to the realisation that the no-boundary proposal is also consistent with a universe which is not closed.

At a George Washington University lecture in honour of NASA's 50th anniversary, Prof. Hawking theorised on the existence of extraterrestrial life, "primitive life is very common and intelligent life is fairly rare." 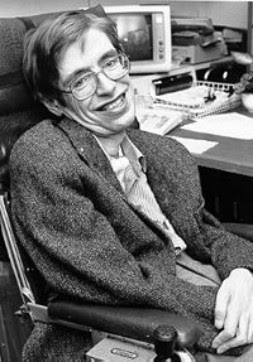 I communicate with a computer system. I have always used IBM compatible computers, on my wheel chair. They run from batteries under the wheel chair, although an internal battery will keep the computer running for an hour if necessary. The screen is mounted on the arm of the wheel chair where I can see it, more recent systems have the whole computer in a box on this arm. The original systems were put together for me by David Mason, of Cambridge Adaptive Communications. This company manufacture and supply a variety of products to help people with communication problems express themselves. Recently, Intel engineers designed a new computer for me powered by a Pentium II processor, which I now use.

On the computer, I run a program called Equalizer™, written by a company called Words Plus inc. A cursor moves across the upper part of the screen. I can stop it by pressing a switch in my hand. This switch is my only interface with the computer. In this way I can select words, which are printed on the lower part of the screen. When I have built up a sentence, I can send it to a speech synthesizer. I use a separate synthesizer, made by Speech+. It is the best I have heard, though it gives me an accent that has been described variously as Scandinavian, American or Scottish. I also can use Windows 98 through an interface called EZ Keys, again made by Words Plus. I am able to control the mouse with the switch through cleverly selected process from a small box shown on the desktop. I can also write text using similar menu's to those in Equalizer.

I can save what I write to disk. I write papers using a formatting program called TEX. I can write equations in words, and the program translates them into symbols, and prints them out on paper in the appropriate type. I can also give lectures. I write the lecture beforehand, and save it on disk. I can then send it to the speech synthesiser, a sentence at a time. It works quite well, and I can try out the lecture, and polish it, before I give it.

In non-wireless areas, Intel manage a 3G account for us so that Professor Hawking is able to use the internet from anywhere in the world, via a PCMCIA 3G card.

The computer has been replaced about once per year; it is currently (Jan 2009) running on a Lenovo Thinkpad T60 and the next model will have an X61 at its heart.

The computer is running on Windows XP. For many years it has been impossible to upgrade beyond Windows'98, because Professor Hawking's favourite speech software, Equalizer by Words-Plus, was made in 1986, and was designed to run only on DOS based operating systems. However, Intel has kindly funded the conversion of the software to XP. This involved Words-Plus re-writing the whole program for today’s operating system.

Due to Professor Hawking's active lifestyle, it is impossible to power his chair computer via the mains as he is never in one place long enough to make this practical. Thus the laptop needs to be powered by the wheelchair batteries, which are similar to car batteries, in the back of the chair.

It is essential that Stephen is able to make use of a telephone. He is able to use Voice over IP, or connect his chair computer directly to a telephone socket. The process works by sending digital commands from his computer instructing the phone system to dial a number, answer the phone or hang up at the end of a call.

Who's got the remote?

Stephen has a universally programmable infra-red remote control attached directly to his computer system. This enables him to operate many of the electronic items in his home, such as televisions, video recorders and music centres. He also has a radio control device which enables him to open doors and operate lights throughout his home. He is now also able to operate doors within his workplace. With the opening of the newly built Centre for Mathematical Sciences, he will be able to get about the building virtually unassisted.