Michio Kaku (b. January 24, 1947) is an American theoretical physicist specializing in string field theory, and a futurist. He is a popularizer of science, host of two radio programs and a best-selling author.
Kaku has publicly stated his concerns over issues including the human cause of global warming, nuclear armament, nuclear power, and the general misuse of science. He was critical of the Cassini-Huygens space probe because of the 72 pounds of plutonium contained in the craft for use by its radioisotope thermoelectric generator. Alerting the public to the possibility of casualties if its fuel were dispersed into the environment during a malfunction and crash as the probe was making a 'sling-shot' maneuver around earth; he was critical of NASA's risk assessment.
Ultimately, the probe was launched and successfully completed its mission. Kaku is generally a vigorous supporter of the exploration of outer space, believing that the ultimate destiny of the human race may lie in the stars; but he is critical of some of the cost-ineffective missions and methods of NASA.
Kaku credits his anti-nuclear war position to programs he heard on the Pacifica Radio network, during his student years in California. It was during this period that he made the decision to turn away from a career developing the next generation of nuclear weapons in association with Dr. Teller and focused on research, teaching, writing and media. Dr. Kaku joined with others such as Dr. Helen Caldicott, Jonathan Schell, Peace Action and was instrumental in building a global anti-nuclear weapons movement that arose in the 1980s, during the administration of US President Ronald Reagan.
Kaku was a board member of Peace Action and on the board of radio station WBAI-FM in New York City where he originated his long running program, Explorations, that focused on the issues of science, war, peace and the environment.
From Wikipedia 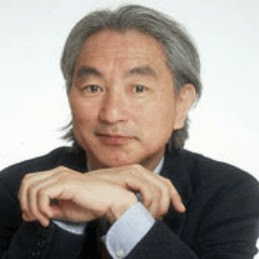 Quick Questions With Michio Kaku
1. If time machines exist, can we ever hope to meet our older, or younger, selves?
A. That is a big "if." But assuming they exist, then there is hope that we might meet our older or younger selves, but they won't be exactly "us." The river of time, I believe, may fork into two rivers if we travel in time.Hence, if we jump from one time line to another time line, we may meet ourselves in the past, but these people won't really be "us." They will be genetically identical to us, but will be a younger or older version of ourself in a parallel universe. Hence, we won't have any time paradoxes. So if we change the past, we change someone else's past, who is genetically identical to us, but is not really "us." Of course, we won't know for sure until we finally build a time machine. (In fact, I give a blueprint for a time machine in my book, Physics of the Impossible, which is consistent with all known physics.)
2. Since we haven't ever met any time travelers from the future, does that mean they will never be invented?
A. No. Perhaps we are not interesting to them. We think we are so great that they will want to visit us, but maybe we are too primitive for them. After all, if we see an anthill, do we go down to the ants and say "I bring you beads. I bring you trinkets. Take me to your leader"? Some of us may even have the urge to step on them.But the technological distance between an ant and us may be small compared to the technological chasm between us and a time-faring civilization. They may be thousands to millions of years ahead of us in technology, and hence have no interest in visiting us. But one day, if someone knocks on your door and says she is your great-great-great-granddaughter, do not slam the door. Perhaps in the far future our descendants will develop time machines, and want to visit their illustrious ancestors.
3. Are fears of robots taking over the world, Terminator-style, ever founded in reality?
A. Yes, robots may eventually take over the world. But we will have plenty of warning. Right now, robots have the intelligence of a cockroach. A retarded, stupid cockroach. Our most advanced robots take about six hours just to walk around a strange room. It may be years to decades before they are as smart as a mouse, then a rabbit, then a dog or cat, and finally a monkey. By the time they have the intelligence of a monkey, they can be dangerous, since they will have agendas of their own. But we will have plenty of warning. By the time they are as smart as a monkey, I think we should put a chip in their brains to turn them off when they have murderous thoughts. The key is that we will have plenty of time before these robot creations become truly sentient and conscious, with their own goals and desires.
From: http://science.discovery.com/questions/michio-kaku/michio-kaku.html
Posted by Lilia Morales y Mori at 8:08 AM