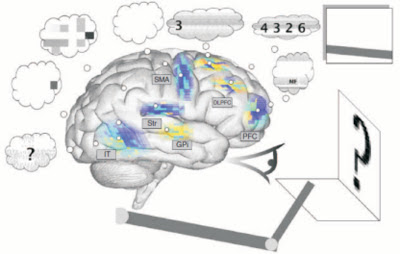 
A team of researchers from the University of Waterloo have built what the claim is the world’s largest simulation of a functioning brain.

The purpose is to help scientists understand how the complex activity of the brain gives rise to the complex behavior exhibited by animals, including humans.

The model is called Spaun (Semantic Pointer Architecture Unified Network). It consists of 2.5 million simulated neurons. The model captures biological details of each neuron, including which neurotransmitters are used, how voltages are generated in the cell, and how they communicate.

Spaun uses this network of neurons to process visual images to control an arm that draws Spaun’s answers to perceptual, cognitive and motor tasks. 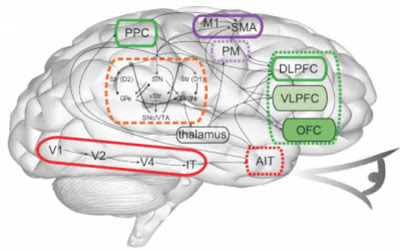 Spaun functional architecture. Thick black lines indicate communication between elements of the cortex; thin lines indicate communication between the actions election mechanism (basal ganglia) and the cortex. Boxes with rounded edges indicate that the action selection mechanism can use activity changes to manipulate the flow of information into a subsystem. The open-square end of the line connecting reward evaluation and action selection denotes that this connection modulates connection weights. (Credit: Chris Eliasmith et al./Science)
While the claim appears to be misleading, since IBM Research – Almaden actually recently simulated 530 billion neurons and 100 trillion synapses on a supercomputer, the Waterloo researchers explain that “although impressive scaling has been achieved, no previous large-scale spiking neuron models have demonstrated how such simulations connect to a variety of specific observable behaviors,” the researchers say in a Science paper.

“The model can perform a wide variety of behaviorally relevant functions. We show results on eight different tasks that are performed by the same model, without modification.

“This is the first model that begins to get at how our brains can perform a wide variety of tasks in a flexible manner — how the brain coordinates the flow of information between different areas to exhibit complex behavior,” said Professor Chris Eliasmith, Director of the Center for Theoretical Neuroscience at Waterloo, Canada Research Chair in Theoretical Neuroscience, and professor in Waterloo’s Department of Philosophy and Department of Systems Design Engineering.

Unlike other large brain models, Spaun can perform several tasks. All inputs to the model are 28 by 28 images of handwritten or typed characters. All outputs are the movements of a physically modeled arm that has mass, length, inertia, etc.

Researchers can show patterns of digits and letters to the model’s eye, which it then processes, causing it to write its responses to any of eight tasks. And, just like the human brain, it can shift from task to task, recognizing an object one moment and memorizing a list of numbers the next. Because of its biological underpinnings, Spaun can also be used to understand how changes to the brain affect changes to behavior., the researchers suggest.

“In related work, we have shown how the loss of neurons with aging leads to decreased performance on cognitive tests,” said Eliasmith. “More generally, we can test our hypotheses about how the brain works, resulting in a better understanding of the effects of drugs or damage to the brain.”

In addition, the model provides new insights into the sorts of algorithms that might be useful for improving machine intelligence. For instance, it suggests new methods for controlling the flow of information through a large system attempting to solve challenging cognitive tasks.

Professor Eliasmith has written a book on the research: How To Build A Brain will be availabe this winter.