Quantum Consciousness
Sir Roger Penrose, OM, FRS (born 8 August 1931) is an English mathematical physicist and Emeritus Rouse Ball Professor of Mathematics at the Mathematical Institute, University of Oxford and Emeritus Fellow of Wadham College. He has received a number of prizes and awards, including the 1988 Wolf Prize for physics which he shared with Stephen Hawking for their contribution to our understanding of the universe. He is renowned for his work in mathematical physics, in particular his contributions to general relativity and cosmology. He is also a recreational mathematician and philosopher.

Born in Colchester, Essex, England, Roger Penrose is a son of Lionel S. Penrose and Margaret Leathes. Penrose is the brother of mathematician Oliver Penrose and correspondence chess grandmaster Jonathan Penrose. Penrose was precocious as a child. He attended University College School. Penrose graduated with a first class degree in mathematics from University College London. In 1955, while still a student, Penrose reinvented the generalized matrix inverse (also known as Moore-Penrose inverse, (see Penrose, R. 'A Generalized Inverse for Matrices.' Proc. Cambridge Phil. Soc. 51, 406-413, 1955). Penrose earned his Ph.D. at Cambridge (St John´s College) in 1958, writing a thesis on 'tensor methods in algebraic geometry' under algebraist and geometer John A. Todd. He devised and popularised the Penrose triangle in the 1950s, describing it as "impossibility in its purest form" and exchanged material with the artist M. C. Escher, whose earlier depictions of impossible objects partly inspired it. In 1965 at Cambridge, Penrose proved that singularities (such as black holes) could be formed from the gravitational collapse of immense, dying stars (Ferguson, 1991: 66).

In 1967, Penrose invented the twistor theory which maps geometric objects in Minkowski space into the 4-dimensional complex space with the metric signature (2,2). In 1969 he conjectured the cosmic censorship hypothesis. This proposes (rather informally) that the universe protects us from the inherent unpredictability of singularities (such as the one in the centre of a black hole) by hiding them from our view behind an event horizon. This form is now known as the "weak censorship hypothesis"; in 1979, Penrose formulated a stronger version called the "strong censorship hypothesis". Together with the BKL conjecture and issues of nonlinear stability, settling the censorship conjectures is one of the most important outstanding problems in general relativity. Also from 1979 dates Penrose's influential Weyl curvature hypothesis on the initial conditions of the observable part of the Universe and the origin of the second law of thermodynamics. Penrose wrote a paper on the Terrell rotation.

Roger Penrose is well known for his 1974 discovery of Penrose tilings, which are formed from two tiles that can only tile the plane nonperiodically, and are the first tilings to exhibit fivefold rotational symmetry. Penrose developed these ideas from the article Deux types fondamentaux de distribution statistique (1938; an English translation Two Basic Types of Statistical Distribution) of Czech geographer, demographer and statistician Jaromír Korcák. In 1984, such patterns were observed in the arrangement of atoms in quasicrystals. Another noteworthy contribution is his 1971 invention of spin networks, which later came to form the geometry of spacetime in loop quantum gravity. He was influential in popularizing what are commonly known as Penrose diagrams (causal diagrams). In 2004 Penrose released The Road to Reality: A Complete Guide to the Laws of the Universe, a 1,099-page book aimed at giving a comprehensive guide to the laws of physics. He has proposed a novel interpretation of quantum mechanics. Penrose is the Francis and Helen Pentz Distinguished (visiting) Professor of Physics and Mathematics at Pennsylvania State University.
Penrose is married to Vanessa Thomas, with whom he has one child. He has three sons from a previous marriage to American Joan Isabel Wedge (1959).

Roger Penrose is slight in figure and gentle in mien, and he is an Roddly diffident chauffeur for a man who has just proposed how the entire universe-including the enigma of human consciousness-might work. Navigating from the airport outside Syracuse, N.Y., to the city's university, he brakes at nearly every crossroad, squinting at signs as if they bore alien runes. Which way is the right way? he wonders, apologizing to me for Ins indecision. He seems mired in mysteries. when we finally reach his office, Penrose finds a can labeled "Superstring" on a table. He chuckles. On the subject of superstrings-not the filaments of foam squirted from this novelty item but the unimaginably minuscule particles that some theorists think may underlie all matter-his mind is clear: he finds them too ungainly, inelegant. "It's just not the way I'd e.,cpect the answer to be," he observes in his mild British accent. lvhen Penrose says "the answer," one envisions the words in capital letters. He confesses to agreeing with Plato that the truth is embodied in mathematics and e@sts "out there," independent of the physical world and e%-en of human thought. Scientists do not invent the truth-thev discover it.

A genuine discovery should do more than merely conform to the facts: it should feel right, it should be beautiful. In this sense, Penrose feels somewhat akin to Einstein, who judged the validity of propositions about the world by asking: Is that the way God would have done it? "Aesthetic qualities are important in science," Penrose remarks, "and necessary, I think, for great science."

I interviewed Penrose in September while he was visiting Syracuse University, on leave from his full-time post at the University of Oxford. At 58 he is one of the world's most eminent mathematicians and/or physicists (he cannot decide which category he prefers). He is a "master," says the distinguished physicist John A. Wheeler of Princeton University, at exploiting "the magnificent power of mathematics to reach into everything." An achievement in astrophysics first brought Penrose fame. In the 1960's he collaborated with Stephen W. Hawking of the University of Cambridge in showing that singularities-objects so crushed by their own weight that they become infinitely dense, beyond the ken of classical physics-are not only possible but inevitable under many circumstances. This work helped to push black holes from the outer bmits of astrophysics to the center.

In the 1970's Penrose's lifelong passion for geometric puzzles yielded a bonus. He found that as few as two geometric shapes, put together in jigsaw-puzzle fashion, can cover a flat surface in pattems that never repeat themselves. "To a small extent I was thinking about how simpie structures can force complicated arrangements," Penrose says, "but mainly I was doing it for fun;" Called Penrose tiles, the shapes were initially considered a curiosity unrelated to natural phenomena. Then in 1984 a researcher at the National Bureau of Standards discovered a substance whose molecular structure resembles Penrose tiles. This novel form of solid matter, called quasicrystals, has become a major focus of materials research [see "Quasicrystals," by David R. Nelson; Scientific American August, 1986].

Quasicrystals, singularities and almost every other oddity Penrose has puzzled over figure into his current magnum opus, The Emperor's New Mind. The book's ostensible purpose is to refute the view held by some artificial-intelligence enthusiasts that computers wifl someday do all that human brains can doand more.

The reader soon realizes, however, that Penrose's larger goal is to point the way to a grand synthesis of classical physics, quantum physics and even neuropsychology. He begins his argument by slighting computers' ability to mimic the thoughts of a mathematician. At first glance, computers might seem perfectly suited to this endeavor: after all, they were created to calculate. But Penrose points out that Alan M. Turing himself, the original champion of artificial intelligence, demonstrated that many mathematical problems are not susceptible to algorithmic analysis and resolution. The bounds of computability, Penrose says, are related to Godel's theorem, which holds that any mathematical system always contains self-evident truths that cannot be formally proved by the system's initial a)doms. The human mind can comprehend these truths, but a rule-bound computer cannot.

In what sense, then, is the mind unlike a computer? Penrose thinks the answer might have something to do with quantum physics. A system at the quantum level (a group of hydrogen atoms, for instance) does not have a single course of behavior, or state, but a number of different possible states that are somehow "superposed" on one another. When a physicist measures the system, however, all the superposed states collapse into a single state; only one of all the possibilities seems to have occurred. Penrose finds this apparent dependence of quantum physics on human observation-as well as its incompatibility with macroscopic events-profoundly unsatisfying. If the quantum view of reality is absolutely true, he suggests, we should see not a single cricket ball resting on a lawn but a blur of many balls on many lawns. He proposes that a force now conspicuously absent in quantum physics-namely gravity-may link the quantum realm to the classical, deterministic world we humans inhabit. That idea in itself is not new: many theorists-including those trying to weave reality out of supersmngshave sought a theory of quantum gravity.

But Penrose takes a new approach. He notes that as the various superposed states of a quantum-level system evolve over time, the distribution of matter and energy within them begins to diverge. At some level-intermediate between the quantum and classical realms-the differences between the superposed states become gravitationally significant; the states then collapse into the single state that physicists can measure. Seen this way, it is the gravitational influence of the measuring apparatus-and not the abstract presence of an observer that causes the superposed states to collapse. Penrosian quantum gravity can also help account for what are known as non-local effects, in which events in one region affect events in another simultaneously. The famous Einstein-Podoisky-Rosen thought experiment first indicated how nonlocality could occur: if a decaying particle simultaneously emits two photons in opposite directions, then measuring the spin of one photon instantaneously 'fixes" the spin of the other, even if it is light-years away. Penrose thinks quasicrystals may involve nonlocal effects as well. Ordinary crystals, he explains, grow serially, one atom at a time, but the complexity of quasicrystals suggests a more global phenomenon: each atom seems to sense what a number of other atoms are doing as they fall into place in concert. This process resembles that required for laying down Penrose tiles; the proper placement of one tile often depends on the positioning of other tiles that are several tiles removed.

What does all this have to do with consciousness? Penrose proposes that the physiological process underlying a given thought may initially involve a number of superposed quantum states, each of which performs a calculation of sorts. When the differences in the disnibution of mass and energy between the states reach a gravitationally significant level, the states collapse into a single state, causing measurable and possibly nonlocal changes in the neural structure of the brain. This physical event correlates with a mental one: the comprehension of a mathematical theorem, say, or the decision not to tip a waiter. 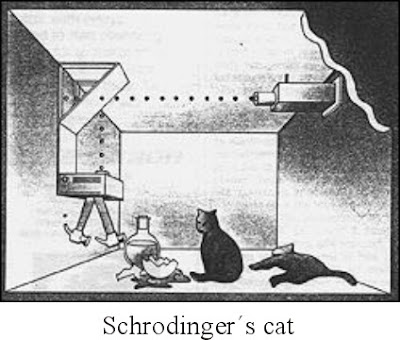 The important thing to remember, Penrose says, is that this quantum process cannot be replicated by any computer now conceived. With apparently genuine humility, Penrose emphasizes that these ideas should not be called theories yet: be prefers the word "suggestions.' But throughout his conversation and writings, he seems to imply that someday humans (not computers) will discover the ultimate answer-to everything. Does he really believe that? Penrose mulls the question over for a moment. "I guess I rather do," he says finally "although perhaps that's being too pessimistic." Why pessimistic? Isn't that the hope of science? "Solving mysteries, or trying to solve them, is wonderful," he replies, "and if they were all solved that would be rather boring."

From: http://www.dhushara.com/book/quantcos/penrose/penr.htm#anchor720208
Posted by Lilia Morales y Mori at 9:05 AM