Einstein may have discovered dark energy without even realizing it 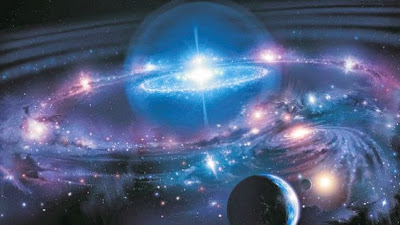 By George Dvorsky
An historian of science from New York University has re-interpreted a correspondence between Albert Einstein and Erwin Schrodinger in which the two scientists argued about the nature of the cosmological constant — a kluge that Einstein embedded in his general theory of relativity to explain why the Universe was neither expanding or contracting (what scientists thought at the time). According to Alex Harvey, without the two of them even realizing it, they were actually discussing the potential for dark energy — an idea that wouldn't hit the cosmological radar for another 70 years.
Back when he proposed the general theory of relativity in 1916, Einstein didn't know that the universe was expanding. In his mind, the size of the cosmos was fixed — what was being held in place by this thing he called the 'cosmological constant.' Without it, the universe would have contracted or expanded in accordance to the amount of mass within it. This mysterious force, argued Einstein, was what held everything together in place. 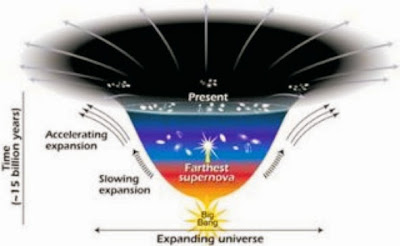 Of course, he had to revise his idea during the late 1920s after scientists discovered that the universe was in fact expanding. After he removed the constant from his equations, Einstein referred to it as the biggest blunder of his career.
But as history now knows, it wasn't that bad of a blunder. In fact, he was actually on to something.
As Alex Harvey has now revealed in a recent paper, Einstein, in conversation with Schrodinger, described a characteristic of the cosmological constant that is now regarded as a fixture of dark energy theory — the idea that it's a non-uniform force in the cosmos that's pushing everything outwards. Moreover, he dismissed the idea right there and then on account of the problems it would create for physicists trying to quantify it — something that has most certainly happened.
Specifically, Einstein and Schrodinger were discussing the properties of the cosmological constant and speculating about what form it might take. Schrodinger wondered if the "cosmic gravitational field" would be fixed or varied in terms of its strength, to which Einstein responded:
This means, one not only has to start out from the hypothesis of the existence of a nonobservable negative density in interstellar spaces but also has to postulate a hypothetical law about the space-time distribution of this mass density. The course taken by Herr Schrodinger does not appear possible to me because it leads too deeply into the thicket of hypotheses.
Bingo. As Harvey notes in his paper, "Einstein described not only the central problem of the search for dark energy but the headaches in formulating its structure." Indeed, Einstein predicted the exact problem now confronting cosmologists as they struggle to devise a coherent theory that explains the exact mechanics of dark energy. They know it's there — but exactly how it works and how it's proportioned throughout the cosmos is a complete mystery.
You can read the entire paper here.
H/t Technology Review.
Top image: lps.ens.fr. Dark energy graphic via NASA/STSci/Ann Feild
Reference: io9
﻿
Posted by Lilia Morales y Mori at 12:51 PM